Have you ever met someone who you just get a strange sense around that something is not right? You go through all the things about them and cannot quite figure out what it is that if off? I’ve been having that thought for ages and the more I think about it, the more I find myself convinced that something is ‘off’ but the less I understand what it may be.

So this evening I came home with the energy of a leaking balloon. Finally, in search of a pick me up I watched an old TED talk on the power of classical music. Surely this will make me feel better. Indeed it did lift my spirits and at times made me laugh. What I didn’t expect was for it to tell what was it was that was off that has been bothering me for months.

I first came across Yupo paper a number of years ago in a George James video from Creative Catalyst. I always wanted to try it but a combination of not seeing it in art stores and George James’ media being watercolour, it never came to fruition. Then, I found Yupo paper when I was at the art store on the COFA campus with Andrew. I excitedly bought some and then left it for a number of months – as you do!

Finally this week, I saw a video with Jodi Ohl: “Graffiti Grunge Art: Abstract Painting on Yupo“. OK. It was time to experiment! 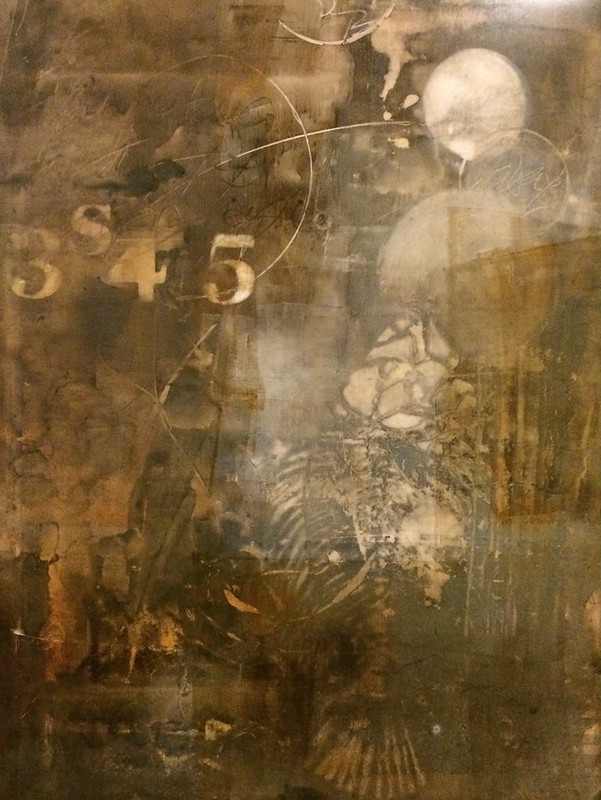 On my first attempt, I found out that it wasn’t as easy as it looked.  Yupo paper is not paper at all. It is polypropylene. The paint isn’t absorbed by the paper; it sits on top of it. Paint can be ‘lifted off’, a technique very familiar to a watercolorist but not as common for someone who works with acrylics. Yet the layering is very familiar and enticing. Not long after finishing my first piece (above), I was already playing on a second one (see below).

Andrew was instantly in love with this new paper as there was not a piece of collage in sight. No little pesky bumps where the paper joins, or the inconsistency of finish (matte / gloss). Much to my amusement these things that I love about collage are the very thing that annoys him! Still, there is something quite beautiful about the slick finish of the yupo. It reminds me of that sheen you get off photographs. To top it off the process is perfect for anyone who wants to defeat their perfectionistic side as it is difficult to control the paint on this surface. It invites happy accidents! 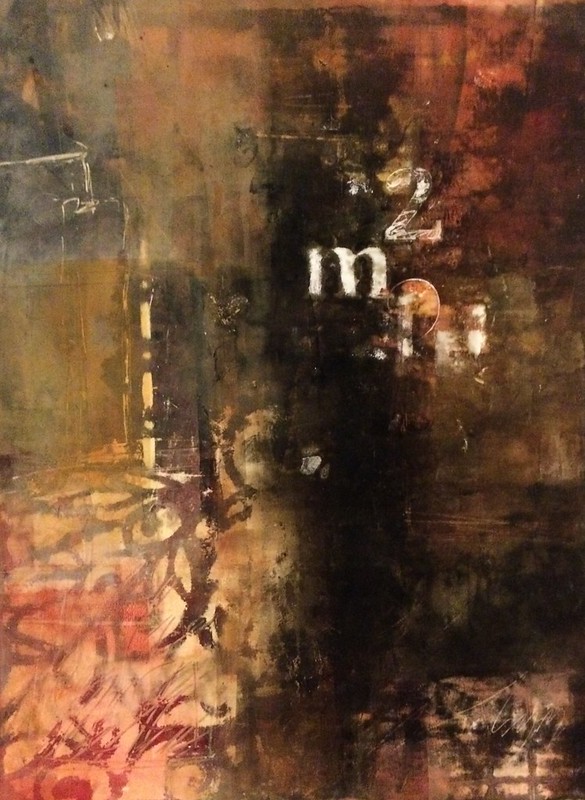 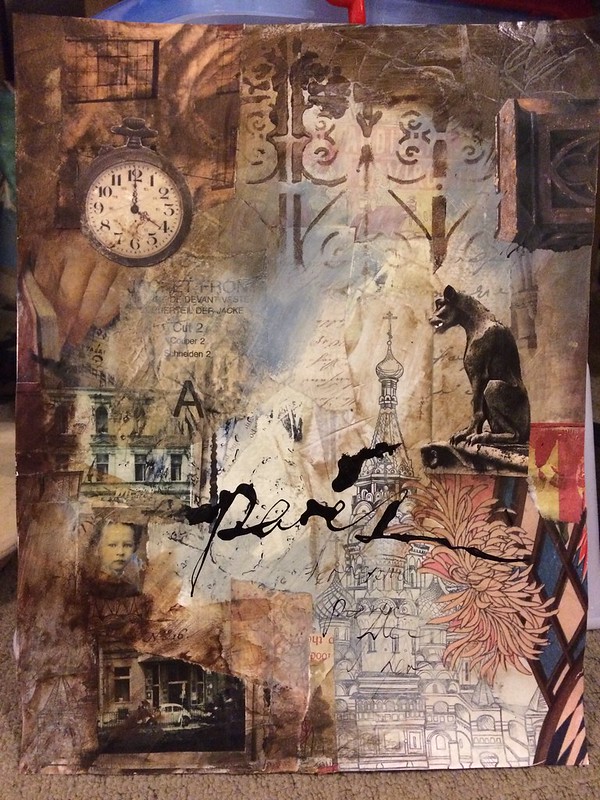 The boys are in for an interesting December as we have decided to acquire a Christmas tree this year. I’ve googled what is likely to happen and I think this could be happening in a living room near me soon.

Andrew’s donated painting sold for $3,000 after 32 bids. Much like people bidding for an item on eBay, there was a flurry all near the end.

I could not possibly be prouder than i was this afternoon. Not only was it a validation that there are people out there who like Andrew’s work; it raised funds for a good cause as well. I was more than a little chuffed. 🙂

A lot of fuss about a frog

A woman approached me in the carpark the other day. ‘Do you have the garden with the rockery?’ ‘No it’s my neighbours’, I said with a touch of jealously as it’s a much nicer space that my courtyard. Turns out this other neighbour isn’t so excited about the beautiful rockery. Apparently there was a knocking noise that kept everyone awake. ‘Is there a pump?’ she asked me. Not being privy to the intricacies of rockery plumbing I couldn’t really say. ‘There’s turtles’ was my best contribution to the conversation.

Turns out this knocking that kept everyone awake is in fact a frog. A striped marsh frog to be exact. I opened my living room doors to hear this noise for myself. Every now and then I do hear a ‘clock’ sound. As soon as I shut my doors, I can’t hear a thing.

My neighbour said to me that they might make her fill in the pond and get rid of the frogs. Can they do that? I’m not really sure. Part of my wonders where it ends. Do they make me chop down my plants because they attract birds and they make noises? It’s an odd one. I guess everyone has the right to some peace and quiet. Yet they can have that if they just sleep with the doors closed? The noises from people coming and going from the lobby; or the plumbing in the building are far noisier than any frog.

This of course is coming from the person who when Andrew bought a ticking clock, I had to move it to another room because it was all I could hear!

Still, I vote in favour of the frog. Unfortunately I don’t get a vote – such is the standing of the renter.

I had the pleasure of going with Andrew this evening to the opening of the Fine Lines exhibition. It is held to raise money for Sydney Story Factory, a local community not for profit designed to assist marginalised young people through creative writing programs.

I wish I had a picture of the final framed piece as it’s colours are much richer than the one Andrew submitted for the catalog. Hopefully if he has a chance over the next couple of days to go back he can take a picture of it before it’s gone for good!

‘I’m trying to eat no more than 6 teaspoons of sugar a day’, says I to a colleague. She looks at me as if that isn’t particularly hard. Then I tell her, apparently the average person eats 40 teaspoons a day. Hmm… 6 does now look challenging.

I’d heard somewhere before that when they take fat out of a product, they often replace it with sugar but I have never quite appreciated just how much sugar. When something says 20 grams, that’s quite meaningless to me. After watching That Sugar Film by Australian filmmaker Damon Gameau, it suddenly made sense. By turning those grams into teaspoons, I could start to grasp how much there really was. And in case you are wondering, the answer is 5 teaspoons.

Just how accustomed I am to food tasting sweet was made obvious when Andrew did the shopping and proclaimed he had bought all items which were low in sugar. Instead of the vanilla bean yoghurt we normally had, he bought the perfectly plain one. It has 1/3 the sugar of the vanilla bean counterpart. We cut up the strawberries and dished out the yoghurt. Neither of us could believe how sour the yoghurt tasted. For me it was only saved by the strawberries and I have quite possibly been turned off yoghurt for life! Andrew – who had asked for extra yoghurt – was pulling faces throughout the whole experience. I feel quite confident that he is not going to want yoghurt again either.

It has taken me quite some time to convince Andrew to even watch That Sugar Film. I get that. A film about eating too much sugar does potentially conjure images of utter boredom with some patchouli smelling vegans who advocate tofu at every meal. It’s quite different really. Damon’s regular breakfast is poached eggs, bacon and avocado so the vegan theory really doesn’t play.

If I had known watching the film would drive Andrew to want to empty the cupboards at 10pm, I may have chosen an alternate viewing time. Still, I’m pleased that I’m not going this alone. There’s nothing worse that deciding you aren’t going to eat chocolate and then finding some in the cupboard and then you go through the process of trying to convince yourself not to eat it! The only sugar i’ve ever been able to pass over at Andrew’s place are jelly beans (evil little creations) and whatever goes in the emergency sugar tub in case of a diabetic low. I never eat what’s in there. I know it’s critical when he goes to that tub that something is inside. Now for Andrew, what’s in that tub is in fact the only high sugar item in the household. The pasta sauce; baked beans; cereal; mayonnaises are all gone.

I’ve never been one for fad diets e.g. only eat bananas, or eat all the meat you want but no carbohydrate. A couple of years ago I lost a few kilos by counting calories. As soon as I stopped counting the calories, the weight went back on. It’s not huge – just a few kilos. However now I find myself at the top of my healthy weight range and with some beautiful clothes that I spent many hours making, which do not fit. So it’s time to try to lose the weight and keep it off. With the help of an app, counting calories can be done. However, counting to 6 is ever easier! So far it’s been 7 days and I think I may have lost 0.5kg. I’m sure I’ve read somewhere that it takes about 4 weeks to make something a habit. So I’ll let you know in another 3 whether I crashed out of this little experiment too early.

This was completed up the other way. When I rotated it, mum thought she saw a deer. Andrew voted reindeer. What can you see? 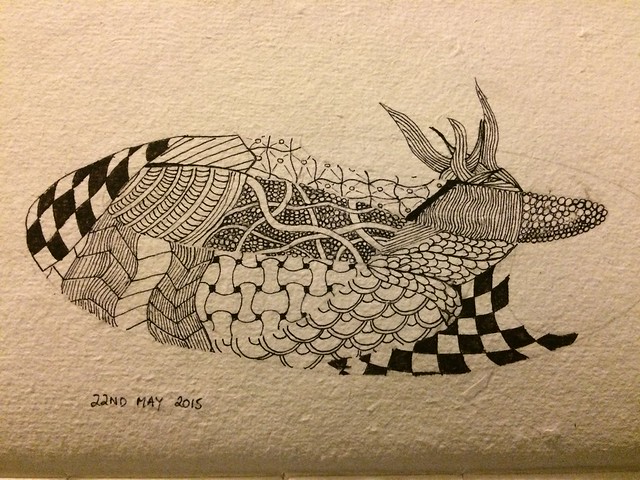